No. That’s what he said. Obviously nothing mechanized and no trucks on premise (so rotational once stockpiled) but, that may have changed.

A letter posted by somebody from another website - political and legislative risk may be coming into play in Chile:

We interpret that Pedro Castillo does not have legislative support for a new constitution or a severe 75% mining tax such as his campaign rhetoric. We interpret that Peru’s voters rejected Keiko Fujimori due to her 15 month sentence for corruption or her father’s 25 year sentence, and that the outcome was more the rejection of Fujimori legacy than an embrace of Castillo. Maybe Peruvians had a tough choice like we Americans between Hillary and Donald in 2016 or Joe and Donald in 2020 ? An mild outcome similar to the recent Nevada up to 1.1% excise tax or revenue tax, or perhaps an up to 3% revenue tax, may be the Peru outcome.

We consider the Leftist calls for a new Constitution and copper mining taxes in Chile to be a far more serious threat. In Chile the Left was peaceful, Democratic and legally elected in 1970 unlike Peru’s Shining Path murderous Maoist guerillas. We continue to regard Chilean tax trends with alarm, and believe the Left in Chile has deep support such as ex-President Michelle Bachelet whose father died in detention under Pinochet. The copper industry opponents or socialists in Chile have historic good standing, where Pedro Castillo’s constituency in Peru includes many indigenous high Andean peoples who are not Spanish speakers, not literate and do not accept the past 5+ centuries of rule. Castillo comes from the Cajamarca province, where the house still stands in Cajamarca where Pizarro slew the last Inca king.

Our sense is that new mining taxes in Chile could be larger than in Peru, and that the drafting of a new constitution in Chile has a greater likelihood and a greater potential for change than in Peru.

Thank you for your response to my questions, BB.

I read it through twice, and it helped me reach a totally new understanding – not directly as a result of the information (which raised several new questions that I think I’ll just keep to myself, thank you very much), but because it pried loose from my mind a certain memory:

When I was five or six years old, our family went to a picnic with a bunch of other families from my dad’s work. A bunch of other boys were playing a game that looked like fun, running around and throwing and catching and chasing after a ball, and I ran over and joined right in. I was the youngest kid, and even though I didn’t understand the rules, I made a couple of nice catches and a couple of nice throws and was really enjoying myself: Oh-what-a-good-boy-am-I… (During the first few months of my Medinah life, back in 2011-2012, there was a period of a week when my investment increased by $17,000 each day!) And then I made a mistake and suddenly I was the one in the middle, the one that all the other boys were keeping the ball away from.

They were all “big kids” – seven and eight and nine years old and clearly experienced at the game, and no matter how I tried to intercept the ball I was always a few beats behind. I quickly recognized my blunder in jumping into this game in which I was so clearly out of my league, and was soon awash in deep embarrassment, running my little self after the ball that was always just out of my reach (goddam abusive naked short sellers tossing millions of shares back and forth at lower and lower prices), while over on the sidelines my parents and siblings watched me suffer (decades later they all groaned when I invited them to get rich with me in Medinah), watched me tire and wear down and try to keep from bursting into tears, all of us – especially me – hoping that some merciful big kid (Maurizio?) might throw me a bone and put an end to the whole nightmare…

Until I read your response BB, I hadn’t thought of that picnic in decades. I don’t remember how I finally escaped, but I believe I came out okay, and anyway, yeah, everything seems a lot clearer to me now… Thanks for the help!

the gold is clearly there. 88M shares traded in a day is no fluke. stay patient my friends…

AUMC’s forward looking statements and targets are ambitious (on timing only), especially given the continued supply chain issues and the Covid-19 situation in Chile. However, I know the Don Luis vein and the ADL mining district are legit! I agree with your view.

Some people are concerned about the financial statements, who is paying for all the work, what’s not being reported, and so forth. Those feelings are valid given what we’ve been through with LP and company. I just don’t share them to the same extent because I know Maurizio, personally, and know what kind of person he is and what his intentions are.

I am not anticipating any dilution in AUMC or MDMN. I didn’t sit through interviews with the SEC while CEO of MDMN to make sure we didn’t get halted and delisted for nothing. I believe all of us MDMN shareholders will receive AUMC shares, proportional to our holdings in MDMN and MDMN’s holdings in AUMC. I don’t know exactly when or how that will occur. However, I still keep the same factor in my mind. When I look at my MDMN shares, I don’t think about the price. I simply count them as 0.005 shares of AUMC for each share of MDMN I own (and I own a lot of MDMN.)

AUMC will play small ball in a non-dilutive fashion and continue to progress toward its goals. Let’s see what the next quarterly update has to say. I have been very patient, I don’t mind waiting several more quarters, if necessary, to watch this unfold into something magical!

Run the numbers on what a 1 million ounce high-grade AU deposit returns with an AISC of $1000 per ounce. That’s my minimum target for just the AU. Add to it a long-term bull market in copper with the possibilities at the LDM, ADL breccia, and Pegaso Nero.

We will have a massive breakout to the upside when this discovery is validated. I will be here when that happens.

Thanks Kevin. I couldn’t agree more. These are major steps that they are accomplishing to finally monetizing the asset.

I have done plenty of Math on this. I think that AUMC pps of $15-$18 (MDMN equivalent of .08 -.10) is a distinct possibility if everything unfolds as we think it will. Even half that would be a magical ride from these levels. I’ve been accumulating. I hope the wounded longs here have enough courage to average down at these levels. They won’t be disappointed. I understand it’s hard not to be jaded having gone through what transpired but this is progressing very very positively into what we were all waiting for this whole time. The time is now to get back in at deeply discounted prices.

Perhaps some shareholders have grown impatient with the uncertainty of waiting for Qtrly reports and decided to sell for some quick cash to put elsewhere. There are many PM equities moving forward rapidly with much greater proven drilled results. Making a quick buck and hoping to get back into AUMC before some great news? Who knows what any particular shareholder here is actually feeling the need to do. I’ll admit to being an optimistic “stuckholder” that will wait to hear definitive news and results. I have what I consider large holdings in both MDMN and AUMC and I’m not selling for good reasons. I’m already doing very well with other speculative and proven plays. My investing style is probably different than most. From all I’ve seen, Maurizio is very methodical and thoughtful in moving the path forward. Repairing the past missteps of previous management has not been an easy task. The property is real and things have been moving on a shoestring budget as WIZ has alluded to. Shareholders are all aware of that. Will it change? The Don Luis Vein (also the Larissa Adit presently on hold) can and will produce cash flow that will move everything along. When things unfold, I believe they will move very, very rapidly. I’ve seen it happen on other speculative stocks, and this one still is speculative, until it isn’t. This is one shareholder waiting for that change to occur.

AUMC finished the day with 617K traded. That’s pretty crazy. According to the OTC website there are 70M total outstanding shares with only 4.7M unrestricted shares. Auryn and others hold the rest in cert form. So 617K out of 4.7M is about 13% of the float traded in one day!

I looked early this morning before there were any trades and I saw about 200K on the bid distributed between about 3 lots. That was pretty high compared to what we see normally. Then in the next couple of hours by the time I looked again there were around 500K traded sold down into those bids. To see what an outlier that is here is the price/volume chart. Note the big green bar down in the lower left showing how massive the volume is compared to recent times (years): 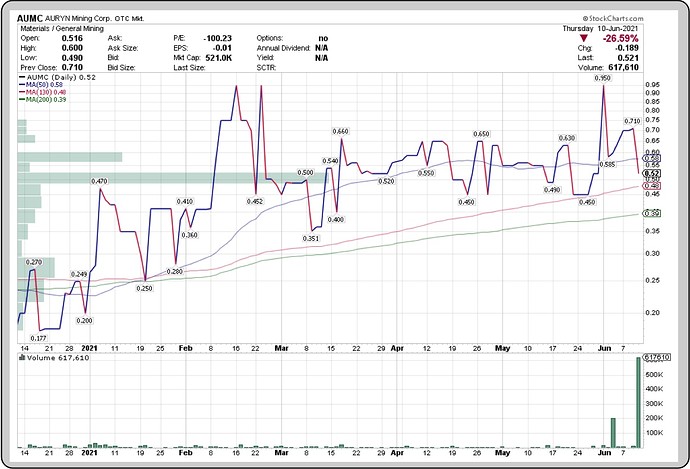 Here’s an hour interval chart over the last 4 1/2 months.
Same basic indicators with a couple extra thrown in. 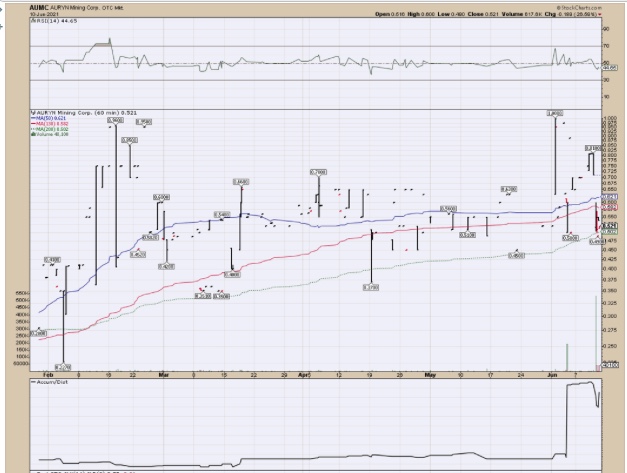 Are we being played here? Is an algorithm being used to accumulate? Highly unusual activity on a tightly held stock. Anyone else see something else? This is not typical day trader activity.

A self trade from taxable to non-taxable account would look similar.

I expanded my chart out to 1 min intervals. 450K of it occurred in a one min. time frame. Wizard’s idea seems possible. I guess all you can do is keep watching. If it was a one-off we’ll be back to a few thousand shares a day (or even zero) as soon as tomorrow.

You will see the same thing on the other big day we had last week.

Buying was in place to meet the sell, or vice versa.

a “self trade”? When I converted 500,000 shrs. of MDMN from traditional IRA to Roth IRA this absolutely didn’t happen. There was no “trade” or market movement. Can you elaborate?

Voila - I just took a tax loss on my AUMC, kept my position, and moved it into a Roth where I will now not have any tax consequences when it goes from $0.50 to $15 in the next two years!

AUMC’s forward looking statements and targets are ambitious (on timing only), especially given the continued supply chain issues and the Covid-19 situation in Chile.

That’s pretty clever. Of course, it is in violation of the wash sale rules and your tax loss from the sale would be disallowed. IRS Rev. Rule 2008-5 covers this in depth.

So I can still do it, just cannot claim the loss, but the gain and all future dividends will be tax-free. :-). Didn’t know about 2008-5. Thanks.

Wiz - look up a wash sale

The wash-sale rule is a regulation that prohibits a taxpayer from claiming a loss on the sale and repurchase of identical stock.