Dave, 35 years in the fire service with no politics on masks.I taught the state hazardous materials technician class to hundreds of firefighters across the state. NIOH standards dictated ppe down to the parts per million(ppm) I have been in every environment you can imagine. I was on a fire truck for AIDS, MERS. you are wrong and the president is wrong, easymillion is endangering lives.

Kevin (and Easy),
You just don’t get my comment. It was just about the “uneducated “scientists” wording. Are there really any or was that just an uneducated comment?
My comment has nothing to do with politics or political party. Shame on you for assuming that.

Rumor that VP Pence has COVID. This appears to be based on two things. He had “pink eye” at the debate which can be a symptom of COVID and also he suddenly canceled plans in AZ without explanation and is now flying back to Wash

And another hyped COVID drug bites the dust. (Also, one of the drugs given to Trump.)

Remdesivir does not reduce mortality for COVID patients as outlined in final report.

Heard "Barrington Declaration" mentioned on Sprott’s Weekly Wrap-Up.
Thought it worth posting as the debate continues to weigh all factors that affect daily living with Covid-19 (bolding added for emphasis).
Basically the science by leading scientists, epidemiologists and policy makers remain unsettled.

About 15,000 scientists and doctors worldwide have signed a newly created document urging an end to pandemic lockdowns, arguing that the policies aimed at curtailing the novel coronavirus have produced “devastating” effects on public health.

The Great Barrington Declaration, which was released Tuesday and continues to gather signatures, was spearheaded by doctors from Harvard, Stanford and Oxford University.

“As infectious disease epidemiologists and public health scientists we have grave concerns about the damaging physical and mental health impacts of the prevailing COVID-19 policies, and recommend an approach we call Focused Protection,” said the declaration.

The document argued for allowing most people to “live their lives normally to build up immunity through natural infection,” while improving safeguards for the elderly and others at greater risk of death from COVID-19.

“Coming from both the left and right, and around the world, we have devoted our careers to protecting people,” said the declaration. “Current lockdown policies are producing devastating effects on short and long-term public health.”

As of Thursday afternoon, the document had been signed by nearly 5,000 medical and public-health scientists; nearly 10,000 medical practitioners, and more than 128,000 “members of the general public,” according to a tally on the website.

The signers disagreed with those in favor of maintaining restrictions until a vaccine is developed .

“Keeping these measures in place until a vaccine is available will cause irreparable damage, with the underprivileged disproportionately harmed,” the document said.

British Prime Minister Boris Johnson’s government rejected Wednesday the no-lockdowns proposal, with a spokesperson saying it was based on an “unproven assumption,” according to the [U.K.] Independent.

“We have considered the full range of scientific opinion throughout the course of this pandemic and we will continue to do so,” said the Johnson spokesperson.

“But what I would also say is that it is not possible to rely on an unproven assumption that it is possible for people who are at lower risk, should they contract the virus, to avoid subsequently transmitting it to those who are at a higher risk and would face a higher risks of ending up in hospital, or worse in an intensive care unit,” he said.

U.S. shutdown policies vary from state to state, as well as city to city, with California and Hawaii under some of the toughest restrictions and South Dakota, Idaho and Utah with some of the lightest, according to a WalletHub analysis updated Monday.

California Gov. Gavin Newsom drew double-takes last week when his office tweeted a reminder to those going out to dinner to “keep your mask on in between bites.”

It maybe 4 years before things return to “normal” although numerous recent changes in our lives will remain. (For instance, I don’t expect I will ever have to go back working in an office environment.)

On the bright side, this should benefit the price of gold. Also, after it is over; expect a period similar to the roaring 20’s which was caused by the aftermath of the 1918 pandemic. Better, as no reason to think prohibition will come back!

The Long Shadow of the Pandemic: 2024 and Beyond

Even when the world returns to “normal,” the legacy of Covid-19 will transform everything from wages and health care to political attitudes and global supply chains.

Cause or effect? It appears that states having difficulty opening up are experiencing the highest death rates from China’s Covid caused pandemic. 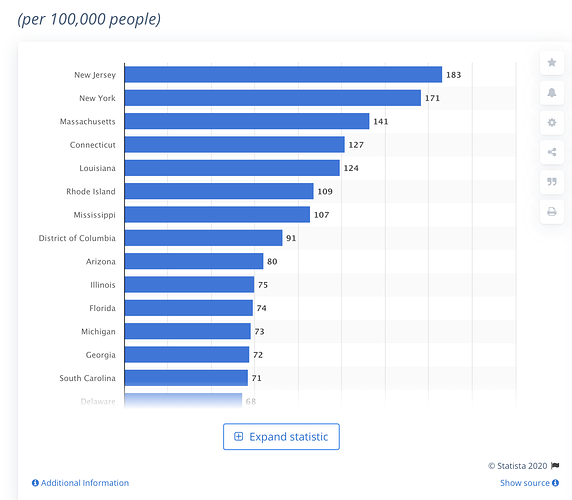