Charts for Metals and Stocks

Sorry I wasn’t able to get all these done during the pullback. I blame gold and silver. After so many years of sitting on their ass, they’ve suddenly become impatient. Lots of charts on this one…

The weekly shows a nice recovery from the balonavirus, pulling back to the 30 MA before launching to new highs. The 20 EMA was support for the previous pullback from almost .55 to a tad below .45. There’s a bit of divergence on the RSI over the last two highs. Possibly more of a pullback coming. 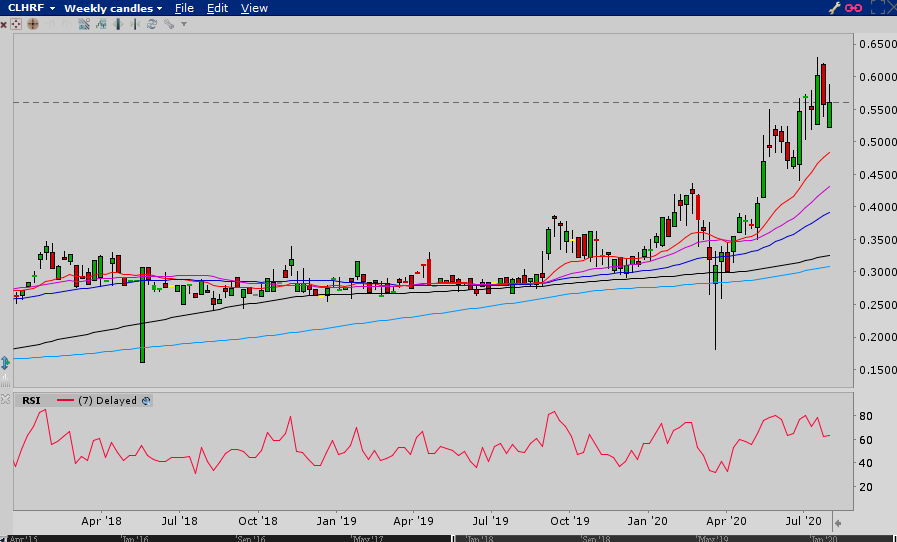 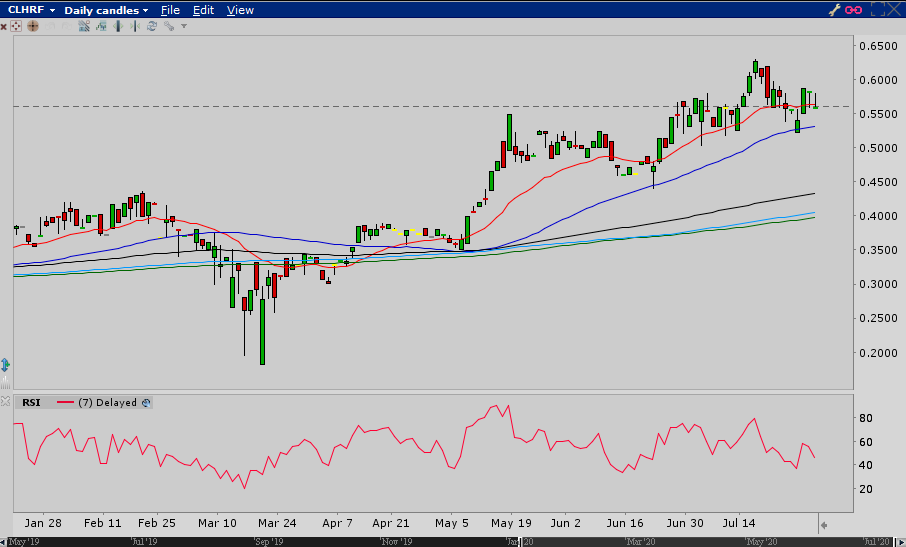 The highlighter arcs on the 4 hour interval chart show that about 90% of a head & shoulders top has been formed. If it plays out the breakdown will occur a tad below .53 with a target price of precisely .4082, give or take a few thousandths of a penny. 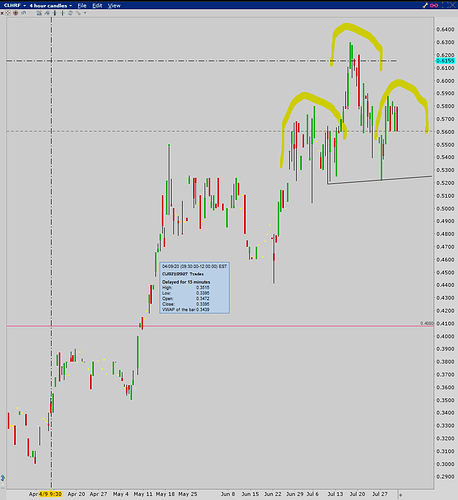 Also, just for fun, I drew two Fib retracement charts. The first one covers the range of the last pullback low to the .63 high and shows a more bullish outlook where the 62% level was just about hit and the stock may possibly consolidate or head higher from here. The second one is a less happy view, unless you’re looking for opportunities to buy shares between .4055 and .3526, give or take a few thousandths of a penny. (For some odd reason I’m enjoying writing and mouthing that word “thousandths” this morning. Probably need more fiber or protein or something). Anyway… 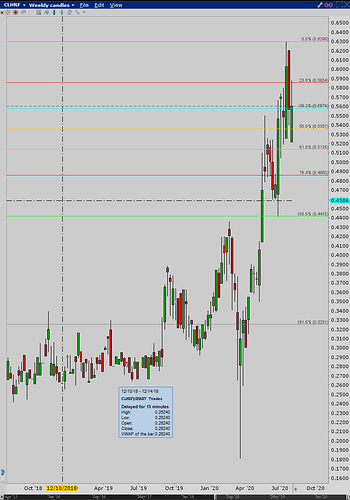 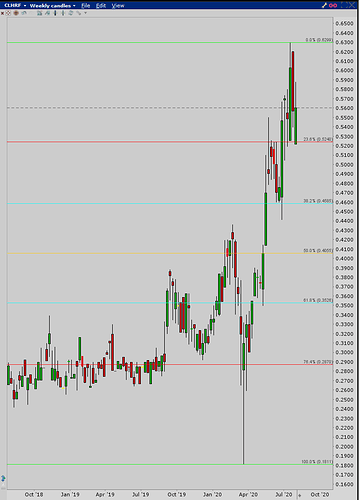 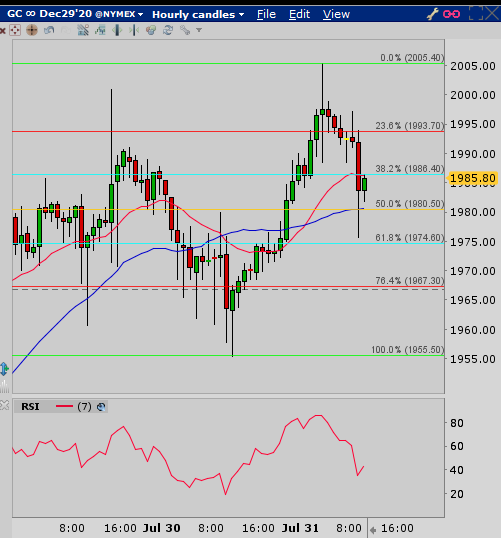 Daily interval is on the top, weekly on the bottom. Like many stocks, the Balonavirus drop and ensuing bounce created the “adam” portion of an adam & eve bottom formation. This stock didn’t break out after the completion of the first “eve”, but instead made a second one and then broke out. I’ll clarify it on the last chart. So far during the breakout the red 20 EMA on the daily chart has been support, and that has been even more the case on the 4 hour interval chart but due to time constraints I’m not posting it. This stock has had a nice run, but RSI on both charts are very much in overbought territory. So when does the pullback come and how far will it go? 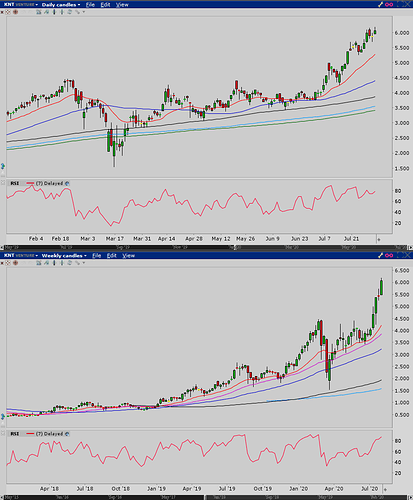 The Adam & Eve & Eve is sloppily highlighted on the daily interval chart below. Both Eves were teases with false breakouts after each had completed its formation. The first went right into making the next, and the second did a false breakout and pullback to close at the breakout point one day, then actually continued the breakout the next day…then pulled back to the breakout point 6 days later and probably shook a lot of longs out before following through and doing what it is supposed to. It currently appears to be making another flag, which could break higher tomorrow or do a slightly deeper pullback before heading to new highs. The target price of this move, IF it plays out fully, is 6.99. If I were long this stock, (I’m not), I would watch it carefully from here on in and make sure I feel confident that it is going to make the complete run to the target price. Sometimes they overshoot and sometimes they sell off before going the distance. Regardless of where it goes from here, when the inevitable deeper retracement ensues, I would first revert to the 4 hour interval chart and watch for support at the 20 EMA, the 50 MA, the 130 and then the 180 MA’s. Along with that, I would run a Fibonacci retracement grid from where ever you end up verifying the high to be to the last major low that occurred on a pullback during the uptrend, which is at 4.25. You should see it clearly on the daily chart as it’s the only pullback that occurred on this run that actually touched the 20 EMA. If the stock is going to new highs after 6.99 or whatever top it hits, you’ll get a pullback to the 50% or 62% retracement and it will probably line up with one of the previously mentioned MA’s. Watch for an RSI reading of 30 or below on the daily chart once that occurs and, as long as this stock is going to continue its uptrend to new highs, a bottom will be made and the uptrend continuation will, well, continue! 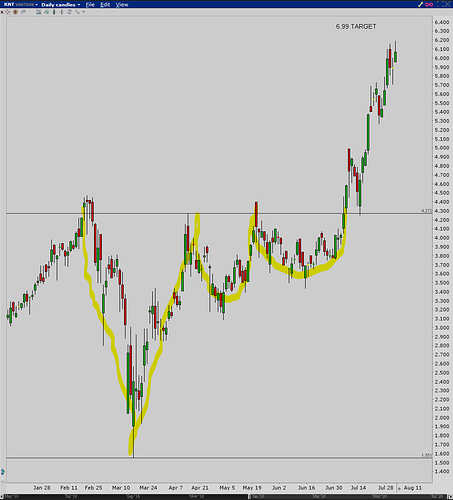 I thought I’d have more time but for some strange reason people kept wanting to talk to me tonight. I’ll try again tomorrow. Some of the symbols you gave me, usually pinks, don’t register with my broker so I’m using the Canadian versions instead.

Silver completes the measured move of the Adam & Eve formation… 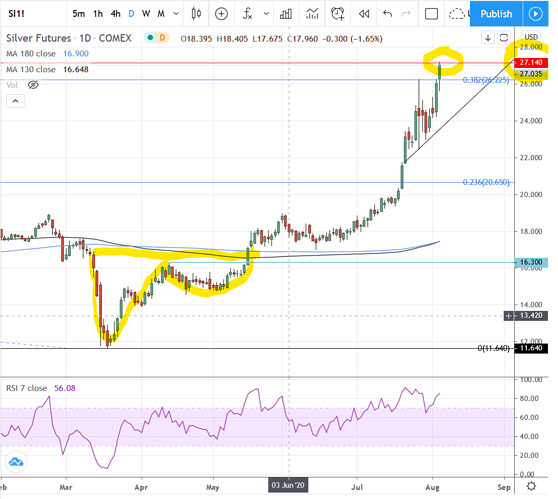 I don’t have my other charts open yet, but the RSI is showing obvious bearish divergence here. Watch for a retracement at least to the trend line on this chart, but I’ll post some of my other charts to get a better idea of where it could go, or at least what I would like to see.

Hit a patch of busy-ness since last weekend. I haven’t forgotten the charts, just haven’t had time to put up any more. How 'bout that gold & silver eh? There’s a good chance I’ll have time to update gold and silver and get to more of Richard’s list today and the rest of the week.