Exactly. When they switched focus to a different target, that generally is a red flag. I lost interest and simply waited for a good point to exit worrying about dilution getting out of hand. Overall, I moving away from miners that don’t actually generate supporting cash flow or no prospects in the foreseeable future. Just too much downside risk. I haven’t yet expanded my position in Novo for that reason. I may wait till production is imminent on that one. Still little sore over being stung by sudden Kirkland departure and I tend to never see these types of risks till after the fact. On the opposite end is somebody like KRR with cash pouring in and are in a position to protect their share price if need be.

Article on Karora Resources - this guy names his top 5 minerals stocks for 2021 and Karora is number 1. Freeport is number 5.

A poster on CEO.CA interestingly opines that Karora is not as much of a long-term miner as Novo Resources will be - see the following:

“This is why I don’t follow anyone, the author of this article supposedly has 5k follows. His number 1 pick for the year is Karora. Karora is a very interesting company, in many metrics a clone a Novo. Proven deposit in western Australia, a mill,large land package, nuggeting gold, 400M market cap. The author even says ore sorting could unlock the gold. I’m sure his guy is loaded to the gills with stock and can’t pump it enough. The story is great on the surface or skin deep. But Karora doesn’t have a Quinton Hennigh or a Rob Humphryson leading the company. And that’s the difference, Novo is building a great company that will be mining in the next century. Karora is a pump and dump. Pumpers never tell you what’s happening under the surface or skin, they never tell you when the dump is coming, it’s all just a game of chicken until it’s over and they move on the next stock or next crypto.”

They both has similar market caps.

Which is the better buy? The CEO.ca poster calling KRR a pump and dump but glowing praise for Novo is bit over the top, me thinks.

These are large core positions in my portfolio, as well as Artemis, WPM, PAAS, AG, OR, SAND, AEM, HL, NEM, KNTNF and quite a few speculative plays. I especially like KNT:CA, BRC.V (BKRRF), SKREF, SSVR:CA, to highlight a few. It was an easier year than most to pick some winning investments and trades.

All of these plays should do quite well this year. Reposting, just in case anyone is short on ideas of where to reinvest after taking some profits off the table. If you haven’t taken a look at BRC.V (BKRRF) you may want to do your own DD on it. This Tonapah project is on previously mined claims that have been inactive since the 1920s and has not been drilled on before. Back then, they just followed the surface veins down until water was reached and halted production. The silver hits they’ve drilled are being measured in kg/ton! It is in the area of Nevada second only to the Comstock lode for silver mining. I bought a few more shares this morning, FWIW, adding to build my core position. I really like the Nevada plays I have now, and anticipate more on the way.

I did take some profits from IVS the day after MG and HR brought it up on the forum. I still kept a core position on it, though. I really like the Sudbury 2.0 prospect, but as HR mentioned, some bulk sampling on the Pardo claims would do a lot to heighten interest in the company. My two favorite plays are still Novo and Karora. The guy that called Karora a pump and dump likely sold too early and reinvested everything riding on Novo. I would disagree with his approach as Karora is clearly producing ahead of Novo, but when Novo hits it’s stride later this summer they may well be in toss up category with production. Karora is accelerating at a measured pace, but Novo has yet to put it’s claims into production.

Novo heralds ore sorting developments as it lines up Steinert …

The way one poster expressed it is that the proven technology used in recycling and waste reclamation has been adopted to profitably dry process the nuggety material found in the Pilbara and especially found at Egina and Purdy’s reward. There are actually two types of dry separators being utilized and tested to be scaled up. The Eddy Current Separator (ECS - TOMRA sorters) and the Steinert KSS 100F LIXT fine mechanical sorting unit are both being used to field test various field conditions. When scaling up production it is likely a hybrid solution involving equipment from both suppliers will be employed.
2021 is truly shaping up to be an exceptional year for many of the mining plays out there.
EZ

I did take some profits from IVS the day after MG and HR brought it up on the forum. I still kept a core position on it, though.

As a matter of disclosure, I sold at .16 on U.S.; few days later it is trading at .254. Conclusion-I have always been much better at buying than the selling part!

I took more profits on GNGXF today and on 12/31. I still hold a core position…mostly in the Canadian-traded IVS because GNGXF is not as liquid. I’m OK holding what I’ve got, but if GNGXF moves higher, I may liquidate the rest of it and just let IVS ride. The run up seems exaggerated from the news on the 29th would dictate, so I’m somewhat suspicious of the run. In the past Inventus stock has run up prior to a financing or Sprott cashing out. I’m wondering if that is the same, or if there is more to the last news release that hasn’t been revealed publicly. We’ll see.

Regarding the liquidity on GNFXF…trust me- it is more liquid than you might think. One of the reasons I sold was worried about liquidity and having a position on the grey market for a long time. It ate up my sell order in a fraction of a second at above my bid much to my surprise!

Picking up NOVO NSRPF down here today in the 1.88 and 1.89 range to add to my holdings. Me things something should come out soon. Just my Spidey sense. LOL.

I got some more at $1.86 :-). That completes my position…unless there is a significant buying opportunity. 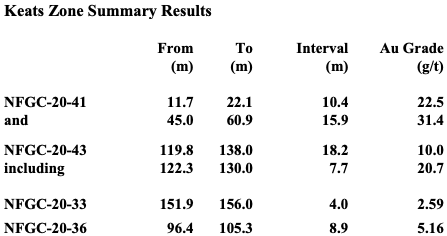 Greg Matheson, P.Geo., Chief Operating Officer of New Found, stated: “Veining in drilling to date at the Keats Zone is characterized by quartz and sulfide mineralization displaying consistent broad thicknesses in the range of 10m to 40m. Intervals of visible gold have been consistently encountered within broader mineralized vein intervals with assays to date returning consistent high-grade Au tenors. Good continuity is evident between holes with approximately 100m of strike now confirmed on this exciting high-grade zone. The zone remains open along strike and to depth, with geophysics, surface sampling, and wide-spaced drilling indicating at least 300m of prospective strike. Increasing our drill count from four to eight drills early in 2021 will help us to ramp-up the grid drilling at Keats and to also test multiple other high-grade targets along 5 km of strike on the Appleton Fault Zone and 3 km of strike on the JBP Fault Zone.”

Note that the exact orientation of the veins is uncertain but believed to be steeply dipping thus implying true widths of the high-grade zone to be in the 70% to 80% range of reported drill lengths.

Note that the exact orientation of the veins is uncertain but believed to be steeply dipping thus implying true widths of the high-grade zone to be in the 70% to 80% range of reported drill lengths. 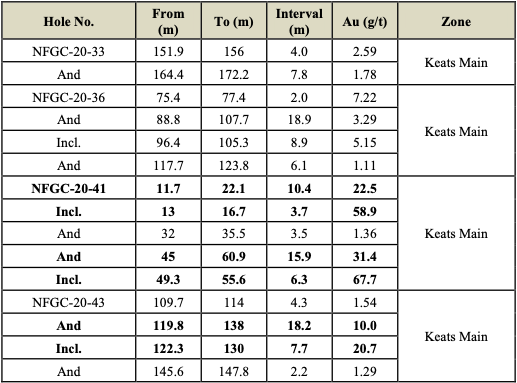 True widths of the new exploration intercepts reported in this press release have yet to be determined but are estimated to be 70% to 80% of reported core lengths. Assays are uncut, and calculated intervals are reported over a minimum length of 2 meters using a lower cutoff of 1.0 g/t Au. All HQ split core assays reported were obtained by either whole sample metallic screen/fire assay or standard 30-gram fire-assaying with ICP finish at ALS Minerals in Vancouver, British Columbia. The whole sample metallic screen assay method is selected by the geologist when samples contain coarse gold or any samples displaying gold initial fire assay values greater than 1.0 g/t Au. Any samples that returned over-limit values (>100 g/t silver) were analyzed with the Ag-OG62 procedure (Ag by HF-HNO3 -HClO4 digestion with HCl leach, ICP-AES or AAS finish). Drill program design, Quality Assurance/Quality Control and interpretation of results is performed by qualified persons employing a Quality Assurance/Quality Control program consistent with National Instrument 43-101 and industry best practices. Standards and blanks are included with every 20 samples for Quality Assurance/Quality Control purposes by the Company as well as the lab. Approximately 5% of sample pulps are sent to secondary laboratories for check assays.

The technical content disclosed in this press release was reviewed and approved by Greg Matheson, P.Geo., Chief Operating Officer and a Qualified Person as defined under National Instrument 43-101.

New Found holds a 100% interest in the Queensway Project, located 15 km west of Gander, Newfoundland, and just 18 km from Gander International Airport. The project is intersected by the Trans-Canada Highway and has logging roads crosscutting the project, high voltage electric power lines running through the project area, and easy access to a highly skilled workforce. With working capital of approximately C$67M the Company is well financed to continue its current 200,000m program, with a planned increase from the current four drills to eight drills by February 2021. New Found has a proven capital markets and mining team with major shareholders including Palisades Goldcorp (33%), Eric Sprott (18%), Novo Resources (11%), Rob McEwen (7%), other institutional ownership (8%), and management, directors, and insiders (4%). Approximately 65% of the Company’s issued and outstanding shares are subject to escrow or 180-day lock up agreements.

New Found Gold will be attending the 2021 AME Remote Roundup with a Core Shack booth January 18-22. Visit New Found Gold’s virtual booth for the following presentations: Greg Matheson, P.Geo., our Chief Operating Officer, will be presenting the Queensway Project on January 18 and 21 at 10:30 am PST, and Denis Laviolette, P.Geo, President, and Craig Roberts, P.Eng., Chief Executive Officer, will provide a corporate presentation on January 20 at 10:30 am.

I gotta tell you, Rick - if the Steinert sorter works out as testing has shown and Novo’s new mill is able to accommodate increased head grades, then Novo Resources is gonna be one heckuva ride. In addition, Novo owns significant stakes in companies like New Found Gold (your post above).

Vancouver, British Columbia (January 12th, 2021) – Vizsla Resources Corp. (TSX-V: VZLA) (OTCQB: VIZSF) (Frankfurt: 0G3 ) (“ Vizsla ” or the “ Company ”) is pleased to provide results from two new holes at the Tajitos vein zone at the Panuco silver-gold project (" Panuco " or the " Project ") in Mexico. Vizsla completed fourteen holes at Tajitos in 2020 and has received results from six holes, the Company has resumed drilling at Tajitos in 2021.

Thanks Hurricane. Nice to know that I own some of New Found with my shares of Novo. Hope they rock it too.

Could not help picking up more Novo at 1.805 today. Every time I think I am done then I realize the unrest could cause Gold and Silver to go ballistic along with any PR from Novo and I pick up more. Also picked up more Silver coins from my local Gold and silver shop on Monday.