It’s been a long time since anyone has mentioned Artemis, one of the earliest Pilbara plays that received a great deal of attention on this thread.(Rod gave it a mention on Charts for Metals and Stocks last October.) I still have a position so I check it from time to time. Here is some recent news that may be of interest:

Drilling is underway at Platina Resources’ part-owned Munni Munni Project near Karratha in Western Australia, host to one of Australia’s largest undeveloped palladium deposits and endowments of platinum, gold and rhodium.

Platina controls a 30% interest in the project while partner Artemis Resources Limited (ASX:ARV) has the remaining 70% and is operator.

The palladium price has climbed to a record high over US$2,900 per ounce, more than a 50% rise from a year ago. Gold and rhodium prices have also performed very strongly over the last 12 months.

“Given the significant increase in the price of palladium, gold and rhodium during the last year, this has enhanced the number of options available to create value from the project,” said Platina Managing Director, Mr Corey Nolan.

“Platina is working very constructively with Artemis to assess a number of mutually beneficial options to realise value from the project.”

• Juno and Voyager targets located approximately 9km N of Apollo and have now been prioritised and appear related to a NE-SW striking magnetic feature that transects the nearby Budgiedown magnetic anomaly held by Rio Tinto.

• All these targets are interpreted to sit within the same geological and structural corridor as the Havieron gold-copper discovery that is now under development.

• Apollo and Atlas are to be drilled first and continue to be the highest priority targets coincident with structural, geophysical and geochemical anomalies located ~3km to the NW and N of Havieron and are adjacent to and straddle a major N-S fault that transects Havieron.

• Exploration Incentive Scheme (EIS) grant of $150,000 for co-funded diamond drilling has just been awarded to Artemis from the Government of Western Australia for the drilling of the Enterprise targets.

• Several key regional exploration projects are located in the immediate vicinity and adjacent to the Artemis Paterson Central tenement, and the Company notes that the 2021 drilling season is now underway;

o Greatland Gold recently announced the commencement of a drilling campaign under Juri JV with Newcrest.

o Rio Tinto’s Budgiedown and Dekka targets are situated within 7km of the Juno and Voyager targets.

Summary of Drilling at Carlow Castle

Following a multifaceted drilling strategy, these two drilling campaigns at Carlow Castle have returned a number of significant results, which continues to highlight the potential of the deposit.
(https://wcsecure.weblink.com.au/pdf/ARV/02369503.pdf)

I’ve been buying this little gem from the low $2’s I think it has a tone of potential with a great team.

Vancouver, BC, May 4, 2021: New Found Gold Corp. (“ New Found ” or the “ Company ”) (TSXV: NFG, OTC: NFGFF) is pleased to announce assay results from an additional four holes drilled at the Keats Zone (“ Keats ”). These holes were drilled as part of the Company’s ongoing 200,000m diamond drill program at its 100%-owned Queensway Project (“ Queensway ”), located on the Trans-Canada Highway 15km west of Gander, Newfoundland.

*Note that the host structures are interpreted to be steeply dipping and true widths are estimated to be 70% to 80% of reported intervals. Intervals are calculated at a 1 g/t Au cut-off grade; grades have not been capped in the averaging. This table shows highlight intervals, a number of these holes returned additional intervals of gold mineralization as reported in Table 2 below.

Greg Matheson, P.Geo., Chief Operating Officer of New Found, stated: “ The outstanding intervals of 131.1 g/t Au over 4.65m plus 124.4 g/t over 17.7m in Hole NFGC-20-59 yield the highest width x grade of any hole to date at Keats (cumulative +2800 mg/t). These intervals provide further drill confirmation of the substantial zone of near surface high-grade gold mineralization at the north end of Keats. We continue our infill and step-out drilling at Keats and look forward to reporting further results in the near future.”* 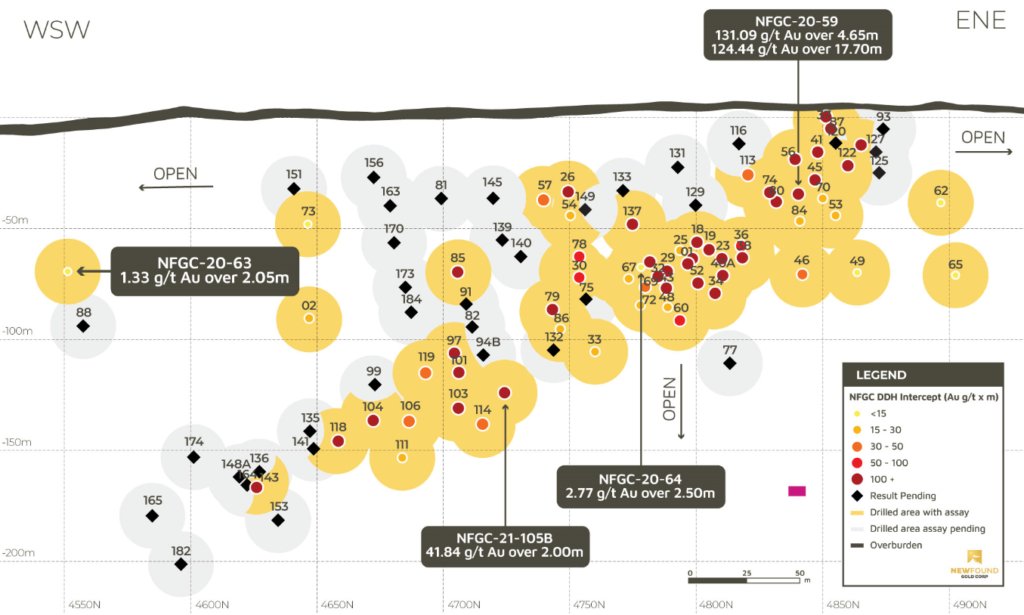 Note: Au g/t x m calculations include all Keats Main intervals for each hole as reported in Table 2. 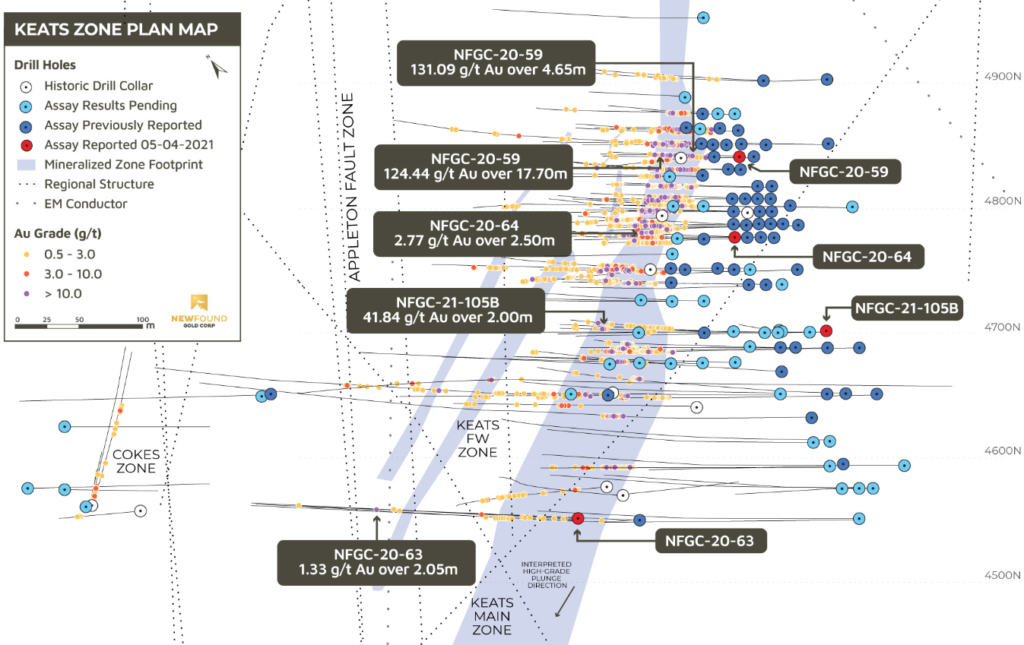 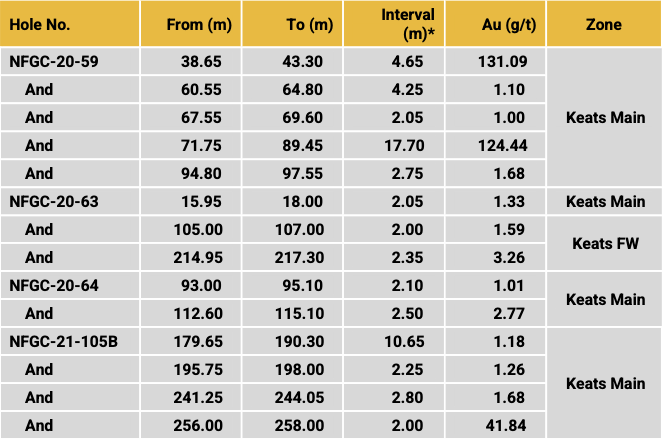 Table 2: Summary of results reported in this release.

*Note that the host structures are interpreted to be steeply dipping and true widths are estimated to be 70% to 80% of reported intervals. Intervals are calculated at a 1 g/t Au cut-off grade; grades have not been capped in the averaging.

Table 3: Location details of drill holes reported on in this release.

Who would have thought that NFG would mean path to riches, instead of No F*in Good !!!

I was surprised when they were given that stock symbol that they didn’t raise an eyebrow !

Well, thanks to prior long discussions on this thread by Mike and Rick I latched onto NFG and am doing “just fine”.

This board is an excellent place to get tips - and then do your own diligence.

At the risk of repeating myself, it is an easier year than most to pick some winning investments and trades. NFG is definitely one of them. Thanks HR & MG for bringing them to the forum. I do have quite a few favorites though, and Blackrock Silver Corp (BRC.V, BKRRF), formerly Blackrock Gold Corp, is definitely one of them. It is still inexpensive at under a buck. I look for it to go much higher. The results of their drilling program continue to impress (highlighted by me for emphasis) :

May 05, 2021, ‑ Vancouver, British Columbia. Blackrock Silver Corp. (the “Company”) is pleased to announce more high-grade gold and silver drill intercepts from its core and RC drilling program on the 100% controlled Tonopah West project located in the Walker Lane trend of Western Nevada. These results support the high-grade nature of the DPB and Victor targets; validate the Company’s understanding of the structural orientation of the vein structures at DPB; and highlight the considerable silver and gold potential within these two growing target areas.

"In under one year we have completed 53,000 metres of drilling and have successfully identified ten high-grade veins ranging in size from 400 metres up to 1.5 kilometres in strike, almost all of which remain open for expansion. …
(https://blackrocksilver.com/news/)

One mining company I just heard about yesterday GMTN Gold Mountain Mining Corp close to home in Kelowna, anyone know anything about this company looks to have some promising signs?

In a report Monday, the bank’s analysts said that they could see copper prices rallying to $13,000 a tonne as the market continues to see a significant supply crunch and growing demand. Copper prices on the LME are currently trading at $9,932.50 a tonne , down 0.32% on the day.

The analysts noted that the copper supply, as measured by inventories in LME warehouses, is at its lowest level in 15 years. They added that stocks could currently cover 3.3 weeks of demand.

From Karora News Release this morning:
May 7, 2021

Highlights
• First quarter 2021 consolidated gold production of 24,694 ounces and gold sales of 25,547 ounces was precisely on track with budget, positioning the Company well to deliver 2021 guidance. Full year consolidated 2021 gold production guidance of 105,000 to 115,000 ounces is maintained (assumes no significant interruption in operations as a result of the COVID-19 virus).

• Cash Position and Balance Sheet: Karora ended the first quarter of 2021 with a strong cash position of $76.7 million, and working capital of $63.2 million, slightly lower by $3.0 million and slightly higher by $6.4 million respectively from December 31, 2020. The cash position decrease was due to timing of planned investment into Karora’s assets as part of 2021’s capital program as well as a scheduled US$2.5 million cash payment to Maverix Metals as part of the Beta Hunt royalty buy back agreement announced in 2020.

• At Beta Hunt’s Larkin Zone, drilling intersected 19.0 g/t gold over 9.0 metres, including 542 g/t over 0.3 metres in hole EL-EA2-023E with visible gold mineralization observed in the drill core. The Larkin Zone discovery was announced in September 2020.

• Second new high grade nickel discovery at Beta Hunt in the last six months, known as the “Gamma Zone - 50C”, where 1.6% nickel over 4.6 metres, including 18.4% nickel over 2.2 metres was intersected in hole G50-22-005E. The drilling, which was targeting nickel, also intersected gold mineralization above and below the 50C trough and suggests the Beta Hunt gold mineralized system extends for over 3.5 kilometres of strike from the northern end of the A Zone.

• At the Lake Cowan prospect, air core drilling on the dry salt lake returned an interval of 1.35 g/t gold over 50 metres, including 3.64 g/t over 16 metres from hole HIGA8864, an excellent result from first pass drilling in this underexplored area.

• At the Spargos Reward Gold Project, continued strong drilling results were announced, including 6.1 g/t over 14.0 metres in hole SPDD0003, which confirmed the interpreted high grade gold plunging shoot thesis by extending the shoot to over 300 metres down-plunge (remains open down-plunge).

Paul Andre Huet, Chairman & CEO, commented: "I am pleased with Karora’s first quarter performance, which places us on a very strong footing to achieve our full year 2021 gold production guidance of between 105,000 and 115,000 ounces and AISC1 of US$985-$1,085 per ounce sold. First quarter gold production of just under 25,000 ounces was right on budget as we prepared new higher grade mining areas at Higginsville Central. Over the course of 2021, as we have previously stated, we expect quarterly grade improvements resulting from Spargos and Two Boys to drive increased production towards the second half of the year.